Positioning for TPLO radiographs: (under sedation or anesthesia)

Lateral view: Pull the unaffected leg away (abduct or pull cranial). Position the affected leg with the stifle and tarsus at right angles. Center the x-ray beam on the stifle or as close to it as possible. Be sure to include the stifle, entire tibia and tarsus in the exposure. In the radiograph the sesamoid bones of the femoral condyles should overlap.

Caudal-Cranial View: The patient is positioned in sternal recumbency. Abduct the contralateral hip. Pull the affected limb distal and straight so that the patella rests on the table. Do not twist or rotate the tarsal joint or paw. Center the x-ray beam on the stifle again. Include the stifle, entire tibia and tarsus in the exposure. In the radiograph the patella should be centered between both fabella. The medial border of the calcaneus should be aligned with the center of the distal tibia. 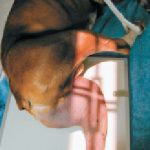 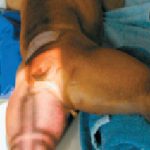 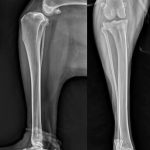